Removing the Application Catalog Role within ConfigMgr was not as straight forward as i was hoping !

Like many SCCM admins historically the Application Catalog Web service Point and Website point were installed in order to deploy applications to Users.
However, this feature is now depreciated and User deployments can be deployed without this role as the client will query a management point instead for all deployments (user and device).
(https://docs.microsoft.com/en-us/sccm/core/plan-design/changes/deprecated/removed-and-deprecated-cmfeatures) 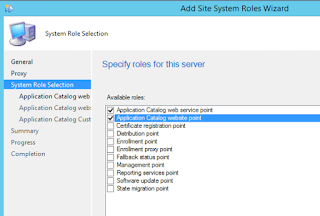 I decided that this role should be removed as we were on 1810 Hotfix2 and colleagues had stated the transition was near seamless (see below regarding a reported BUG and quick fix to modify any Client setting).

In our case the removal of the website within Client Settings and the system roles was straight forward however, we saw in a few cases Clients are no longer receiving User Deployments and I thought I would write this blog to share my experience and how to detect systems in a similar state.

The client is looking for User deployments using the AppCatalog server website however, this does not exist and it not referenced in Client Settings.

We can see that Policy is downloaded however fails to compile.

The Image below details the "Actual" policy applied and as you can see 'Reserved1' details the AppCatalog Website which does not exist; however the client is told to use this address to find User deployments.  As the site does not exist policy cannot exist and Software Center does not show User deployed Applications. 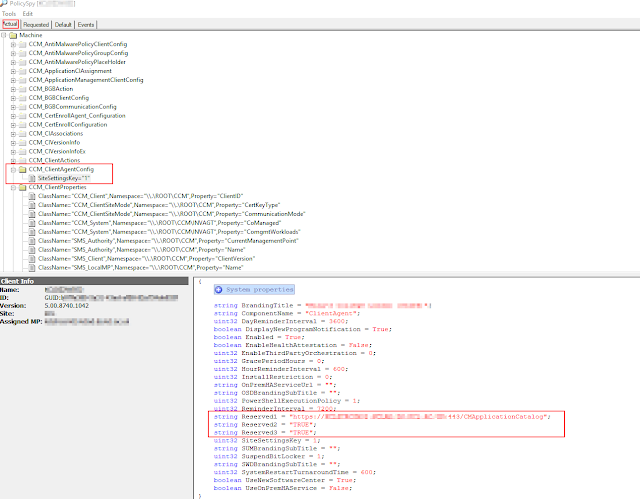 The Image below details the "Requested" policy applicable via Client Settings. As you can see 'Reserved1' does not detail the AppCatalog Website; the client should understand that and receive User policy from the Management Points as intended.  If this was working the SCClient_Domain@USERNAME_1.log would show details for the Management Points instead. 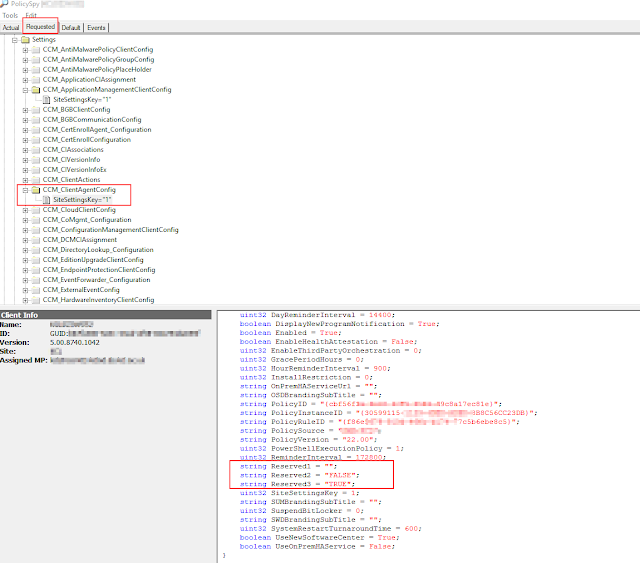 While I cannot explain why the Client Settings are not compiling it did conclusively show that the Site Server was offering the right policy but the client was not applying it.  Various sites have stated this behavior is a known bug and that simply changing a Client Setting would re-engage the client and allow the desired policy to apply.

This client would not update which made me wonder how many systems in the estate have this exact issue?


Using PowerShell you can query the class CCM_ClientAgentConfig namespace and report a compliance metric; this is easily deployed via ConfigMgr Baselines.. 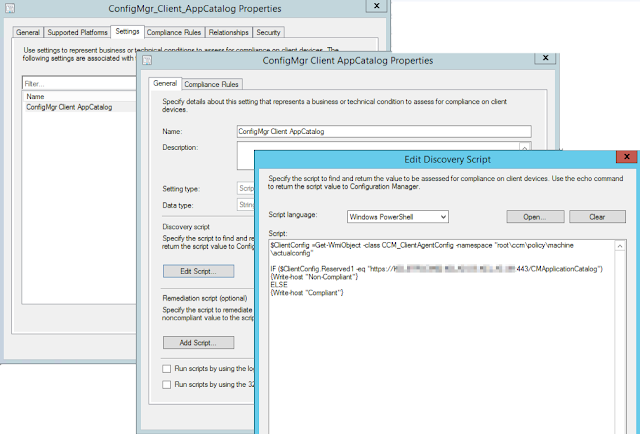 The hope at this point is that the Agent Config client settings compile issue is limited to a small number of systems. Once the exposure of non-compliant system is understood we can see if a Remediation Script needs to be added to the Baseline.

Software updates within an Enterprise organisation has been fairly straight forward until you attempt to use it for Feature Upgrades of Windows 10.  SCCM is very reliable at delivering the updates (Rollups, Updates, Upgrades) and as i have previously proved is UWF aware in Windows 10.
However, the Feature Upgrade does require a bit of prep work if you do not want the new Appx Applications installed as part of the Upgrade.


Moving between the 1507-1703 branches each Feature upgrade would reinstall the Appx Applications that you previously removed. Microsoft has addressed this in the 1703 - 1709 feature upgrade and if you removed an application it will not come back.  However, if the new branch has a new application this will get installed.

By using the SetupConfig.ini file for an OOBE after the Feature upgrade, you will be able to ensure unwanted Appx applications are not provisioned and made available to the user; in addition to any other post action script you need to run.


Content of the SetupConfig.ini
In the ini file i have referenced the location of a file called "SetupComplete.cmd" that will be copied from this location to the hidden Feature Upgrade folder on the root of the C drive.  c:\$WINDOWS.~BT\Sources\Scripts\SetupComplete.cmd


Within the Setupact.log you will see the /PostOOBE switch detailed with the contents of the SetupConfig.ini file appended to the Feature Upgrade Command Line used to run the Software update.


Here is the cool bit.

The script below will create the SetupConfig.ini and SetupComplete.cmd files for you dynamically.  I use this in an SCCM Baseline to create and ensure they are upto date with my modifications.


In addition to the post custom scripts to set Background wallpapers and Start menu layouts I use the baseline to set 'Deprovisioned' regsitry keys so the Appx Applications are not provisioned for new users.

I have scripted the process to create the keys using the PackageFamilyName. Remember do not Deprovision SystemApps otherwise you may experience issues with Applications you do want to use i.e. Photos.  See Microsoft for the different categories https://docs.microsoft.com/en-us/windows/application-management/apps-in-windows-10 . Anton Romanyuk Makes reference to this in his blog (Thanks).